Kat Kourbeti sat with Far from the Madding Crowd director Thomas Vinterberg, and got chatting to him about what makes this film stand out in a sea of period drama adaptations.

Be warned, the interview contains discussion of a few moments in the film which some might consider spoilers…

Kat Kourbeti: How has press and reception of the film been so far?

Thomas Vinterberg: I don’t read reviews, but I hear they’re pretty good. All day yesterday I was speaking to very, very enthusiastic and happy people, so that’s obviously incredibly encouraging.

KK: It really has all the makings of a modern classic. You’ve taken a very well-loved novel – it’s something that a lot of women picture as the epitome of romance – but you’ve really brought it forward. It’s very relatable despite the fact that we don’t live in Victorian times.

TV: That’s the result of hard, hard labour. First of all, it’s David Nicholls and his script, trying to capture the right tone. The Thomas Hardy novel is amazingly rich, you just can’t really relate to it on the screen as a modern human being. So the way he’s translated that into something accessible and yet still loyal to Hardy’s book is fantastic. But it’s in every department that we tried that. We tried to get away from the frocks and bonnets towards something more truthful: the characters, even the character of the landscape. With the camera and the art department we’ve constantly been searching for something truthful and accessible and thus modern, maybe. Even the snail—which I find a slightly odd moment in the film—I think it’s our attempt to hear the grass grow, to make it breathe instead of making it dusty and layered. It was a big challenge, dusting it off, because you obviously end up with dust on your own hands. There’s something incredibly civilised about this country. To some degree, some moments may be over-civilised, so I’ve been struggling a bit with that.

KK: What made you decide that this was a movie that you wanted to make?

TV: I decided to make a movie that I hadn’t written myself. This was a declaration of love to Thomas Hardy and his work. I read the script of David Nicholls—I hadn’t read the book, he’s not in our curriculum back in Denmark—and there was this very important chemical reaction that has to happen before going through the hassle of making a movie. I just fell in love with these characters. They’re so rich, so complex, so moving, so vulnerable, and yet it’s melodramatic in the old great way, you know? Swimming to the sea to commit suicide, that was what made me think “I’m gonna go for this, I love this”. When he (Frank Troy, bachelor #3) came back I was a bit disappointed.

KK: He literally goes out with a bang, which made more sense as Troy is a very dynamic character.

TV: I’m glad you say that, because I was disappointed when he came back and I thought “well, we can’t have the audience be disappointed”. 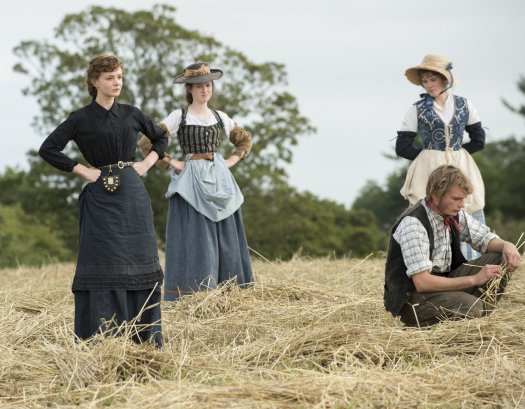 KK: Let’s talk a bit about Craig Armstrong’s score. It really helps to bring the complexity of both Bathsheba and her suitors and the landscape to the forefront.

TV: Craig Armstrong is a world class composer, and we worked really hard to find the roots of the country and the emotional life of the characters. Even finding that fiddly violin took a long time. Trying, and trying, and rejecting, and trying again, it’s refined through hours of music.

KK: Did you have a lot of input as he was composing the score or did you leave him to do his thing?

TV: Oh I didn’t leave him for a second [laughs]. I was over his head bashing him, but loving everything he did. Music doesn’t only have to be good, it has to be right. That took time. I think he found a very honest and naïve and melancholic tone in it, and yet still with a sense of big sense of grandieur. So thank you, I’m glad you liked it.

KK: I have to admit, scores are very important to me, music can make or break a film. So that violin melody in Far from the Madding Crowd is really something else.

TV: She [Nicola Benedetti, the soloist] was a superhero! Her violin cost £2.5 million. It’s not hers, it’s through a fund, but still. She was amazingly beautiful, and amazingly good. And very shy. She came in, did her thing…

KK: There’s that incredible line, “it’s difficult for a woman to define her feelings in a language which is chiefly made by men to express theirs”… How much of that do you think factors in Bathsheba’s character and the choices she makes?

TV: I think it factors more into a gender debate, in a subtle kind of way. It’s a bit on the nose, but it gives the audience something to think about, to start a feminist discussion.

TV: I think Hardy made an incredibly visionary portrait of a woman with the complexity of wanting to be both strong and independent and still trying to devote herself to a man, which I think is a difficult balance. I think he captured it really well.

KK: While most of Bathsheba’s challenges are very much linked to Victorian customs ofcourtship and marriage, in the film it’s not so much about society but rather the intrinsic conflict she faces. Was that a purposeful shift?

TV: I think it’s because I’m a Dane. [laughs] I don’t think I did it purposefully. I’m just not brought up in a class system, so I don’t see it. I don’t wear those glasses. I was so consciously focused on a truthful approach to the characters and their interactions, so maybe that’s where I ended up ignoring the whole class thing. It’s also, I’ve been told many times, a central focus in Jane Austen stories. And I thought, “we’ve been there. I want to come close to these amazingly rich characters, as they are, as human beings, not necessarily as part of Victorian society”. They’re outside, they’re alone. There’s a big loneliness in the title, and it implies to some degree that they’re in a field, the four of them together, abandoned by the rest of the world.

KK: What was it like working with all the cast members? What did you want to see from them and what did you do to get that out of each of them?

TV: Each actor has their own ways. It’s a bit like a rosebush, you have to be able to listen and embrace and make it flourish, but also you have to cut them down, control them and challenge them in their own way. With [Michael] Sheen, it was a very satisfying process of rehearsals. We improvised his past rejection by another woman, to find that sadness which then just sat in his eyes throughout the process of making the film. With Carey [Mulligan] it was very much intense conversations about the dialogue and trying to modernise it. Tom Sturridge was a lot about fencing and being a soldier. Because he’s this urban musician cool guy, so it was about the rigidness. Each of them kind of had their own thing. Matthias [Schoenaerts] didn’t fancy rehearsals, he was like “just switch on the camera”. He looks so earthy already, he was already there.

KK: They all gave great performances. Michael Sheen was so earnest that he never invokes pity, that really surprised me.

TV: Obviously, the hardest part was Oak. He’s humiliated himself, to some degree he’s a castrated man, just hanging around waiting for a woman, and obeying orders. Finding Matthias Schoenaerts was the answer to that. He’s something of a role model. He’s a man capable of listening to a woman, embracing a woman and yet being so much a man, which I think is a rarity. It’s why female audience test results are through the roof with him, they just love him and find him sexy. Of course it’s because of his physicality as well, but also because he listens. He pays attention to Bathsheba.

KK: Lastly I wanted to talk about the film’s aesthetic. The colours, the fact you shot on film, it’s all so vibrant and beautiful. How did you decide on the vision of the film?

TV: I asked the producers, “what do you want from me?”, because this is not what I normally do, this was work-for-hire. They sent me the script, I said “great, I’ll do it”—it was great relief not having to do my own stuff every time. And they said “Thomas, we think you can provide a combination of frankness and believability”, and that was inspiring to me. I said to Charlotte [Bruus Christensen], the DOP—the female DOP—“let’s try to find the sweeping Technicolor sense of the 50s”, and by going on location in every scene, including the interiors, that helped a lot. Shooting on film, it already started to breathe. She’s amazing.

Many thanks to Thomas Vinterberg for taking the time for this interview. You can read my review here.