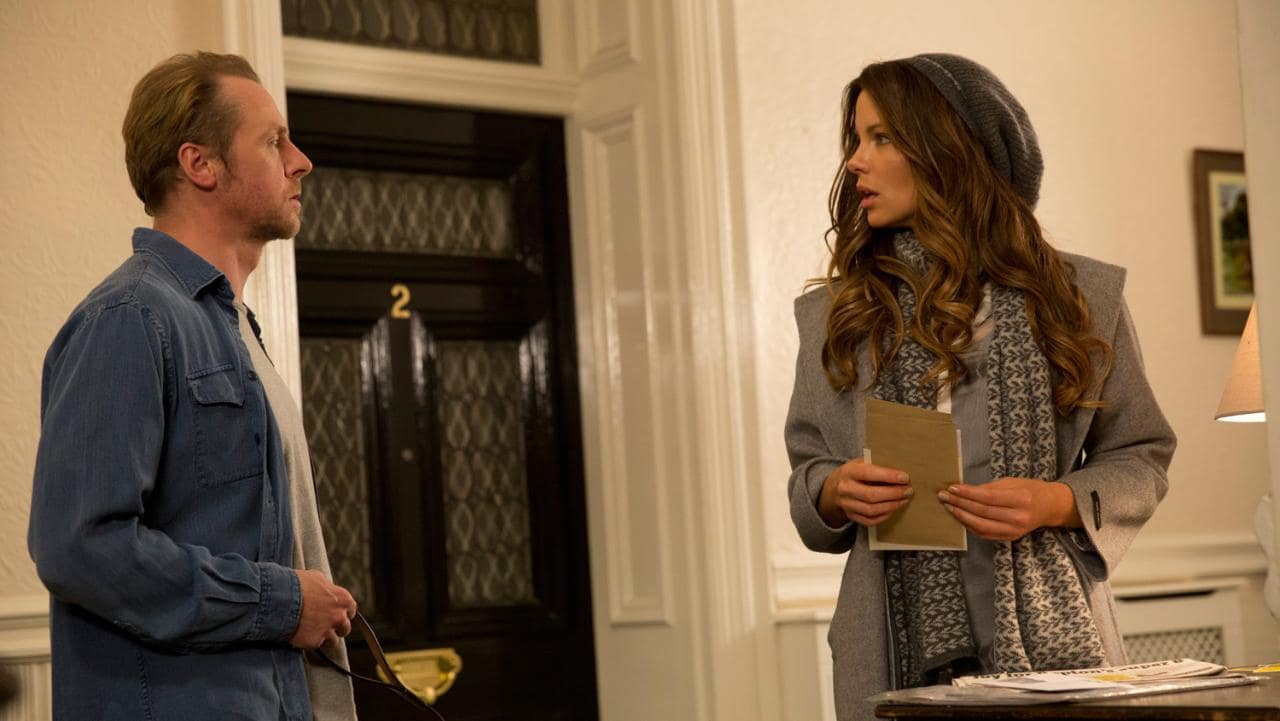 An absolutely average earthling (Simon Pegg) is given the galactic power to do absolutely anything by a group of sinister aliens. Whether he uses his power for good or evil will determine whether Earth will be destroyed.

Seeing the Monty Pythons’ names attached to any film should be a guarantee for laughs, as should the rest of this film’s A-list cast, yet Absolutely Anything falls rather short on the comedy front, feeling more like a clumsy collage of tropey high concept sci-fi, slapstick comedy, and tired jokes which are in dire need of a humour upgrade.

Neil Clarke (Pegg, Star Trek: Into Darkness) is a middle school teacher in London. His dreams of writing a novel remain just that, his love life is pathetic, and his only two friends are the misogynist biology teacher Ray (Bhaskar, Doctor Who) and his dog Dennis (Mojo the dog – voiced by the late Robin Williams). Perfectly average in his general discontent with life, he is surprised to discover that he’s developed the ability to do absolutely anything–with one catch: his commands need to be absolutely literal. The source of the power is the a group of power-crazed aliens, voiced by the Pythons, who have been taking out entire worlds based on the performance of one representative individual given omnipotent galactic power.

Between romancing his neighbour, TV producer Catherine (Beckinsale, Total Recall) whose insane ex-boyfriend Grant (Riggle, 21 Jump Street) has flown in from the US in order to win her back, and trying to sort out the messes resulting from previous commands (like zapping an entire classroom full of unruly children using an alien space gun, or turning his best friend into a duck–and then a sausage–to save him from a band of worshippers who want to kill him and bring him back to life), Neil has his hands pretty full of disaster, which he spends an exorbitant amount of time putting right again. It’s textbook comedy, really, but the thing is, none of it’s very funny at all.

Every joke, from the fact that the aliens are tricked into using “silly sounding female human names” like Sharon, Janet, Maureen, and Kylie, to the gun-and-money-crazy American ex-Marine, to implying Neil is gay because he’s sensitive, to literal dog jokes about Dennis humping Neil’s leg, is an old and tired trope from a school of comedy that’s largely stayed away from films for 30 years–and you can kind of see why. This is the sort of movie your dad, or even your granddad, might find funny, but it’s dressed in the hip clothes of a 16-year-old.

The result is a sad mess of sexist, racist, crude jokes, masquerading as a family friendly rom-com with an A-list cast that’s probably wondering what the hell their agents were thinking. You can’t help but wince at the cast interviews included in the extras of both the Blu-ray and DVD editions, where Beckinsale recounts having to snog a corgi, despite the fact that clearly a lot of well-intentioned effort has gone into the more high concept aspects of the film, like the alien animations and the set and costume design.

A very poor return for the Pythons (this is their first film together since The Meaning of Life in 1983), and what was probably Robin Williams’ last hurrah as a talking dog who helps his owner save the world while shouting “Shag her, Neil!” Classic but also rubbish. What a right shame.